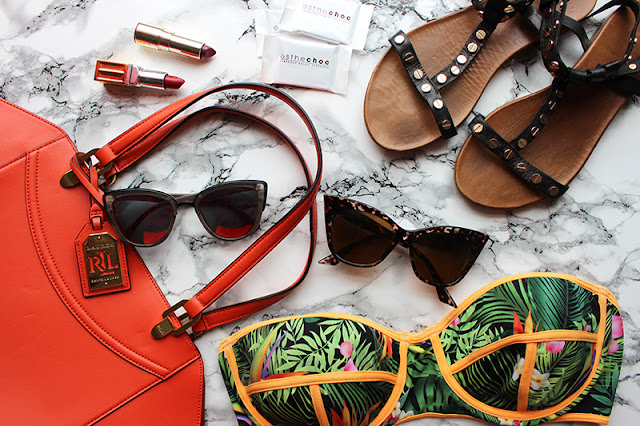 With autumn starting in a couple of weeks time I though I would quickly recap some of my non-beauty favourites. I totally missed Augusts beauty favourites on my YouTube channel but that just means I’ll have extra items to talk about next month so don’t forget to keep an eye out for that.

In terms of clothing I love summer but I have a fairly large summer wardrobe which only gets worn a few months a year so I don’t end up finding too many favourites. The said I fell in love with my Daniel Black Leather Gladiator Sandals, I wore them with everything, they were really comfortable and great quality. Even after wearing them religiously all summer they’re still in great condition and I now have my eye on some Daniel over the knee boots for the colder months.

My go-to bag for everything was this bright Ralph Lauren Bag from My Bag. I always take a bright coloured handbag away with me and this one was perfect, it added a pop of colour to my usually boring outfits but was a great shape and size for a day sightseeing or even for a day at the beach and I’m a little disappointed I didn’t pick up the smaller version too.

I took a fair few pairs of sunglasses away with me but ended up only wearing my Quay ones, I have two pair; one from Topshop and the other from ASOS but love them both equally. They’re affordable, good quality and really fun, I haven’t had a pair of sunglasses that I like this much for years and I’m so tempted to buy a few more pairs.

I’ve also been trying out Esthechoc which is suppose to be a daily portion of chocolate designed to increase the level of antioxidants in the skin, I’m not too sure if it really does this but I think day size portions of chocolates is a great idea and it really stops me eating too much chocolate like I usually would if I were to start an entire bar.

I haven’t been watching much on TV but have recently finished Modern Family and could not recommend it enough, it’s a great series for almost any age and has won numerous comedy awards. I also started to re-watch Hart of Dixie which is potentially my favourite ever series but I don’t think gets enough recognition. I’m think about starting Pretty Little Liars once I have finished but I would love some recommendations too.