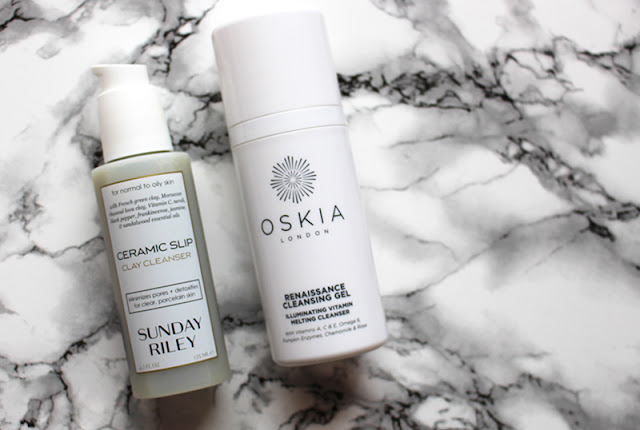 This week I’ve cracked open two new cleansers, which naturally excited me greatly especially as they are from brands I’ve wanted to try from a while.

If you want to try Sunday Riley but don’t want to spend £85 for Luna than Ceramic Slip Cleanser, £35, is a far more affordable introduction to the brand. It’s one of the few cleansers that I have tried which isn’t at all designed to remove make-up, it’s designed to decongest the skin not to break down makeup, making this a good second or morning cleanser. It is aimed more at normal to oily skins where as I find mine to be normal to dehydrated but I can be quite congested so it’s not my perfect cleanser but I still find it helps with clogged pores. It’s perfect if you have oily or acne prone skin as I find it to be quite calming and used over a prolonged time would decongest the skin, that said I have had a slight break out which I think maybe from this cleanser bringing congestion to the surface but I will update soon as to how my skin feels in a few months. I do always finish off with quite hydrating oils and creams after this cleanser just to insure it doesn’t strip my dehydrated skin too much.

Along with the Sunday Riley cleanser I have also been alternative with the Oskia Renaissance Cleansing Gel, £28, which I have heard everyone rave about. I had really high hopes for this cleanser even though I typically only like cleansing balms but this just isn’t as oily as I would like. That said it can still be used for a bit of a facial massage and it leaves no residue behind unlike some balm cleansers. It smells pretty and is filled with Vitamin C and E, pumpkin enzymes for exfoliation and more, it does what I want it to do but I’m yet to be wow’d.

Whilst away in Glasgow I have been using The Organic Pharmacy Cleanser, £39.95, as I have a mini size which travel with regularly and every time I fall in love with just how dreamy it is, once I get round to buying a full tub I’m sure you will hear lots about it from me.

I’ll update soon letting you know just how I get on in a few weeks.