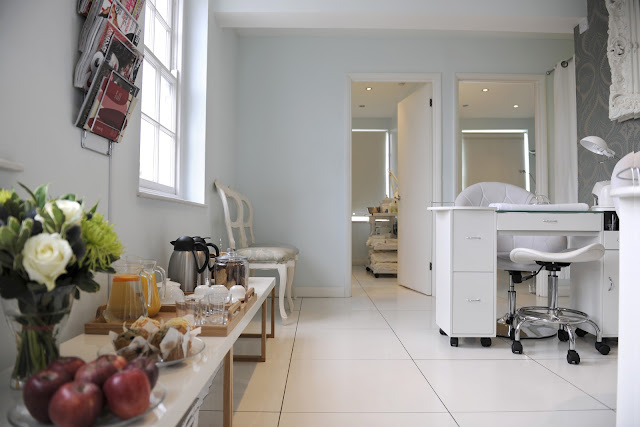 Just before I went on holiday I was invited down to The Chelsea Day Spa on the Kings Road. I had heard it was popular with some of the Made In Chelsea gang and as I love the show I was pretty excited to also visit the spa.

I booked in for a New York Pedicure on a weekday morning, the salon itself was pretty easy to find if you know what you are looking for. It is a little door on the street corner, once there you go up onto the first floor where the actual salon is based. I waited a short while before attended and being taken to the nail rack to pick a colour from the Jessica range. The Pedicure itself was quick and of a high standard although very little buffing of the foot takes place. The pedicure consist of soaking your feet, removing polish, shaping the nails and a polish.

There were a few things I was a little disappointed with although I think I had high expectations. I was a little surprised to see that the room was so small, while I was there there were four people getting manicures or pedicures as well as a facial going on. It all looked and seemed a bit cramped and although I quite like to take to the beautician I felt this wasn’t possible as I didn’t want to disturb others especially the lady getting a facial. I was also disappointed with their colour choices, there were just very normal and boring colours- I really wanted a crazy neon but had to settle for a bright orange.

With all that said I would still return as the price was very good! A pedicure is £20 and a manicure is £15- although it is a special offer it has been on for quite a while. It is such a good price for a mani and pedi in London! Spa Menu here

Overall it wasn’t as great as I expected but would still recommend for a simple manicure or pedicure. I wouldn’t go for anything else as I wouldn’t want a facial in a noisy room (saying that I think some treatments such as waxing are done upstairs, however I can’t comment on it as I didn’t leave the first floor)

Where is your favourite place in London to get a manicure or pedicure?